WASHINGTON (JTA) – As reports of attacks on Jews surfaced late last week, Democratic lawmakers were quick to condemn anti-Semitism – but they didn’t stop there.

“We have recently witnessed worrying anti-Semitic attacks and a disturbing rise in Islamophobia,” Bernie Sanders, Jewish senator from Vermont, leader of the American progressives, tweeted Friday. “If you are committed to a future of equality and peaceful coexistence, please unite against anyone who encourages hatred of any kind.”

Many other progressives quickly followed suit, including several members of “The Squad” in the US House of Representatives.

“The work of dismantling anti-Semitism, anti-darkness, Islamophobia, anti-Palestinian racism and all other forms of hatred is OUR job,” tweeted Representative Cori Bush of Missouri.

Representative Jamaal Bowman from New York wrote: “We have seen an increase in anti-Semitic and Islamophobic hatred, in New York City and across the country – hate speech, hate crimes and other forms of violence.” And Rep. Ayanna Pressley from Massachusetts tweeted, “I strongly condemn the rise in anti-Semitism and Islamophobia that we are seeing across the country.”

Jamaal Bowman, the Democratic candidate for New York’s 16th Congressional District, smiles as he speaks to the media on November 3, 2020 in the Bronx neighborhood of New York City. (AP Photo / Mark Lennihan)

The trend continued throughout the weekend and this week.

“Anti-Semitism has no place in our country or in the world. Islamophobia neither, ”Senator Elizabeth Warren of Massachusetts tweeted Tuesday evening. “It means standing together and condemning all forms of bigotry and hatred.”

The posts were all aimed at reported attacks as Israel and Hamas in Gaza battled a conflict in which more than 250 Palestinians and a dozen Israelis were killed. In New York, Los Angeles and elsewhere, violent attacks on Jews were filmed. Meanwhile, the Brooklyn and Long Island mosques have been vandalized.

Halie Soifer, who heads the Jewish Democratic Council of America, said she understood the impetus to condemn all kinds of bigotry, but warned that this may have the effect of reducing the threat posed by a type of bigotry such as anti-Semitism.

“There should be no tolerance for hatred in any form, and Jewish Democrats strongly condemn intolerance aimed at any racial, ethnic or religious minority,” Soifer told the Jewish Telegraphic Agency. “At the same time, there are unique root causes of anti-Semitism that need to be addressed, and for this reason, we advise against confusing or grouping this distinct form of hatred with another.”

Why Sanders chose to frame his tweet the way he did and whether the Democrats’ messages were coordinated is unclear. His office did not respond to a request for comment. 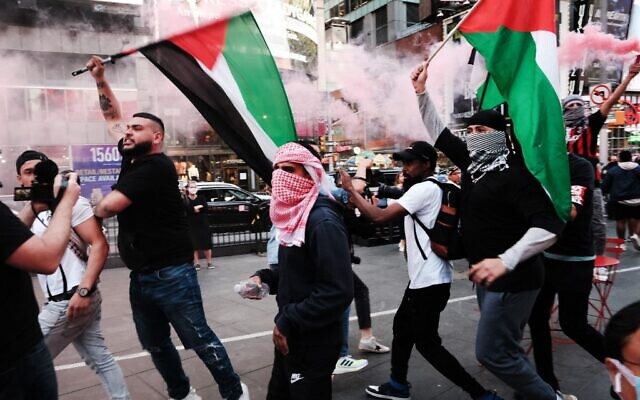 Pro-Palestinian protesters clash with a group of Israeli supporters and police in Times Square on May 20, 2021 in New York City. (Spencer Platt / Getty Images via AFP)

But his approach is not unusual among progressives, who see bigotry not as separate but as stemming from the same toxic tendencies, and Sanders has explained his thinking in the past.

“Like other forms of bigotry – racism, sexism, homophobia – anti-Semitism is used by the right to divide people from one another and to prevent us from fighting together for a shared future of equality, peace, prosperity and environmental justice, ”Sanders wrote in 2019 in Jewish Currents, a left-wing magazine.

Some Jewish commentators have expressed their displeasure at seeing anti-Semitism confused with other fanaticisms, comparing it to the “All Lives Matter” crackdown among conservatives against the Black Lives Matter movement, a stance progressives insult. 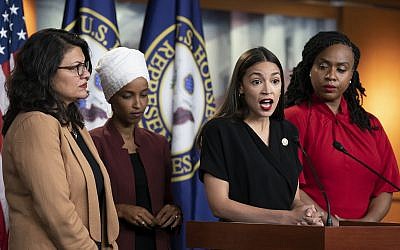 “We will never, ever tolerate anti-Semitism here in New York or anywhere in the world,” she said on Twitter. “The recent wave of attacks is horrific. We stand alongside our Jewish communities to condemn this violence. You can help. Take the free hour-long intervention class in New York City. “

But some said they wanted more. Representative Dean Phillips, a Jewish Democrat from Minnesota, had some advice for his progressive colleagues: Don’t be equivocal about the attacks on Jews.

“I’m going to say the quiet part out loud; it is time for ‘progressives’ to start condemning anti-Semitism and violent attacks against the Jewish people with the same intent and vigor demonstrated in other areas of activism, ”he tweeted on Monday. . “The silence was deafening.”

I am proud to work at The Times of Israel

I’ll tell you the truth: life here in Israel is not always easy. But it is full of beauty and meaning.

I am proud to work at The Times of Israel alongside colleagues who dedicate their hearts to their work day in and day out to capture the complexity of this extraordinary place.

I believe our reporting sets an important tone of honesty and decency which is essential for understanding what is really going on in Israel. It takes a lot of time, commitment and hard work on the part of our team to achieve this.

Your support, by joining The Times of Israel community, allows us to continue our work. Would you like to join our community today?

Join the Times of Israel community

Already a member? Log in to stop seeing this

Are you serious. We appreciate this!

We are really glad you read X Times of Israel Articles in the past month.

That’s why we come to work every day – to provide knowledgeable readers like you with must-see coverage of Israel and the Jewish world.

So now we have a request. Unlike other media, we have not set up a payment wall. But since the journalism we do is expensive, we invite readers for whom The Times of Israel has become important to help support our work by joining The Times of Israel community.

For as little as $ 6 per month, you can help support our quality journalism while benefiting from The Times of Israel WITHOUT ADVERTISING, as well as access to exclusive content available only to members of the Times of Israel community.

Already a member? Log in to stop seeing this

A biting satire on race and capitalism ...