Members of a Crystal family say they are surprised after receiving an anonymous letter in the post suggesting they remove a Black Lives Matter sign from their front yard.

The Buttlers have lived in their Crystal home for almost 11 years. They say this is the first time they have received a complaint from an alleged neighbor.

“I was like ‘who, which of my neighbors is mad at me,'” Melinda Buttler said.

“That seems a bit loose. I imagine I would like them to want to talk to me face to face, at least have some sort of discussion or dialogue,” Josh Buttler said.

In part, the letter reads: “Dear neighbour, I wonder if you are aware that your fist signal conveys an implied threat of violence. The clenched fist also implies the use of force out of disrespect. Do you really think you can change hearts and minds through force? »

The note did not threaten to harm the family, but the Buttler family says it was intimidating.

“I worried about my family. I kind of thought, he’s someone who’s kind of like an anti-black fanatic,” Melinda Buttler said. 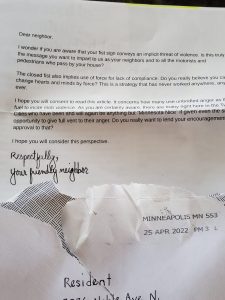 The Crystal family received this anonymous letter in the mail, suggesting they take down their Black Lives Matter sign.

The Buttler family aren’t the only ones to receive this letter. A lady around the corner says she received a similar letter about a year ago after putting up a Black Lives Matter sign.

Melinda and Josh Buttler, who are not black, say they will continue to show support for their diverse community.

“We must love our neighbours. Ultimately, that’s what it’s all about,” Josh said.

“Black people are people. They are made in the image and likeness of God, and so I support them,” Melinda said.

The couple say they have no plans to remove the sign. The letter encouraged the family to put up a much larger sign.

“I reached out to a black business owner to make me a bigger sign so more people could see it,” Melinda said.